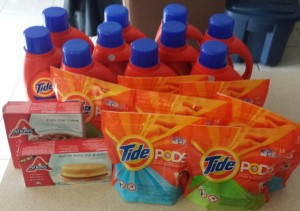 If there was ever a moment where our extreme couponing reached the level of legendary, this was it. Back in late 2014 and early 2015, Walmart was running a few crazy promotions. They started this program called Savings Catcher and you would enter your receipt number and they’d automatically search for sales at competitors and give you the difference back in your Savings Catcher account. At the same time, they were also in stiff competition with both Winn-Dixie and Publix in Florida, so they were matching their BOGO sales too.

Now that’s pretty cool, but what made it even better was an overlapping promo. If you transferred your Savings Catcher “earnings” to a (free) prepaid American Express Bluebird card, they’d double it!

That meant that you would see deals like this…

Chex Cereal on sale BOGO $3.99 at Publix ($1.99 per box)
Chex Cereal regular price $3.48 at Walmart
Pay $3.48 for the cereal at Walmart
Get back $1.49 from Savings Catcher for the price difference, which was then doubled to $2.98.
Final price was just $0.50 after all the cashback you earned. And if you had a coupon? Well, then you probably got the cereal for free or a moneymaker.

I remember there was one week where Land O Lakes Butter was like $0.15 per pound, even without coupons. I bought 22 pounds of butter that week and froze them. I didn’t buy butter for about a year or two after that.

So needless to say, Savings Catcher was awesome and there were moneymaker trips all the time. However, there was one time when Walmart really botched the sale prices that they loaded into the Savings Catcher system. Here’s how they paid a bunch of us a fortune to buy enough Tide to last for years…

In the newspaper, Dollar General had an ad and it stated that Tide 40 oz was on sale for $3.95, plus you could use the $2 coupon in the same newspaper to pay a final price of $1.95.

If Savings Catcher had this deal correct, you’d get $1.29 back for each bottle of Tide you bought ($5.24 Walmart price minus $3.95 Dollar General price) and then it would double to $2.58 when you transferred it to the AMEX Bluebird card. But if you used the $2 Tide newspaper coupon, you would’ve only paid $3.24 to buy the bottle. That means your final net price should’ve been $0.66 after coupon and cashback from Savings Catcher and AMEX. Pretty cool, huh?

But that’s not what happened. What happened instead was probably the best coupon deal ever.

The folks at Savings Catcher weren’t paying very good attention to that Dollar General ad. Instead of putting the $3.95 sale price into the system, they entered the sale price as $1.95 – the price Dollar General was suggesting that you would get if you brought the $2 Tide newspaper coupon to their store. That created this crazy scenario, even without any coupons:

Buy Tide for $5.24 at Walmart. Savings Catcher sees a price difference of $3.29 and it doubles to $6.58 when you transferred it to your AMEX Bluebird prepaid card, making it a $1.34 moneymaker – no coupons needed.

However, remember that we had a $2 Tide newspaper coupon, so that meant that you could do that exact deal, except you were only paying $3.24 out of pocket for the Tide, but still getting $6.58 back from Savings Catcher and AMEX. That’s right; for each bottle of Tide purchased, you could get it for free plus $3.34 profit, more than doubling your money!

Want to see exactly how one of my trips worked out that week? Go here to see a full breakdown of exactly how I made $54 buying Tide and a few other things.

CAF Productions LLC, the parent company of this web site, is a participant in the Amazon Services LLC Associates Program, an affiliate advertising program designed to provide a means for sites to earn advertising fees by advertising and linking to Amazon .com.