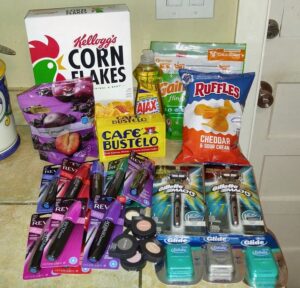 Here’s another crazy extreme couponing trip in our Haul of Fame. This one is from CVS. I don’t still have the article that goes with this trip, but I did some research about the ad that week and what kind of coupons were available and I’m pretty sure I’ve figured it out. The Revlon deal was absolutely insane.

I found this picture on Facebook along with the description that I got all these items for free ($177.93 value) plus $28 of profit. How did I do it? Well, here’s how I think it went down.

First, there was a printable coupon available that week for BOGO Revlon Eye Cosmetics. Kind of crazy that we used to have extreme high-value coupons like that, huh? I had several computers in my house too, so I had a pile of these coupons (probably about eight of them.)

I would’ve never paid that much for those and there are some clues to what really happened based on the other items in the order.

See those Gillette Mach3 Razors? They were regularly priced at $8.99 back then and CVS ran promotions every few weeks to give you $5 Extra Bucks when you buy one. They also did a lot of deals on Almay where the items were full price, but you received something like $5 or $6 Extra Bucks for buying two.

With all those full price items, I know how this trip became such a big moneymaker. Back then CVS was giving me a ton of store coupon total purchase coupons by email. They often sent me some insane stuff like 40% off all regular price items in a single transaction. Then I’d load up on deals like the Revlon, Almay and Gillette to do giant transactions of full price items that generate Extra Bucks.

I don’t know if the registers disallow these percentage coupons now on items that generate Extra Bucks, but back in 2017, the registers made the deduction.

There’s also another wild card. CVS registers used to automatically deduct the max value of a BOGO coupon. I don’t know if that happened in this trip, but for a long time it worked like this:

If an item like the Revlon Mascaras was priced at $7.99, but the fine print of the BOGO coupon said that the max value of the coupon was something like $12.99, you would’ve been able to buy two for $7.99 each and get a $12.99 deduction for the coupon, making them just $2.99 total for both. (And in a deal like this Extra Bucks deal, you’d have a big moneymaker after getting the Extra Bucks for buying $15 of participating items.)

But even without that, a huge BOGO printable coupon for Revlon, the Extra Bucks deal, and a percentage off regular priced items CVS weekly email coupon would’ve been enough to make a giant super-extreme couponing moneymaker deal. That’s surely what happened here.

CAF Productions LLC, the parent company of this web site, is a participant in the Amazon Services LLC Associates Program, an affiliate advertising program designed to provide a means for sites to earn advertising fees by advertising and linking to Amazon .com.