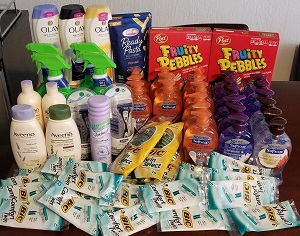 Couponaholic started during the height of the couponing craze that exploded with the launch of TLC’s tv show “Extreme Couponing.” I stumbled on the show at a time when money was very tight for me and I saw folks on the tv using their coupons to score cartloads of stuff for free and thought, “If he/she can do it, so can I.” I started doing some research and learned the ropes of couponing. Before long, I was walking into Publix with a stack of coupons and walking out with hundreds of dollars of groceries, and sometimes they were handing me money at the end of the transaction! CVS and Walgreens were also regular stops, and occasionally Winn-Dixie, Target and Walmart.

To plan my trips, I was using some web sites (many of which no longer exist.) Then one day I thought, “Steve, you know these people are making money with their couponing sites. If they can do it, so can you.” So I did, and that’s how Couponaholic was born.

Over the next few years, I had the opportunity to build my team with other awesome shoppers. You old timers probably remember them – Monica, Wayland and Maureen to name a few. We were posting insane shopping trips all the time when the coupon policies were more permissive and the newspaper and printable coupons were more plentiful.

Through the years, we changed hosting providers for the web site and many of our old shopping trip posts were lost, but I managed to recoup a handful of the best ones. For some of them I still have the full breakdowns of the trip, but for others I don’t have that. However, in many cases, I still have the story and remember some of the deals. Sometimes there was a glitch, sometimes it was just a dumb promotion that a store ran, and sometimes it was just manufacturers eager to get us to try their new products. Those stories are what I plan to share with you in our “Extreme Couponing ‘Haul’ of Fame” below.

So, grab a coffee, a glass of wine, or whatever your beverage of choice is and let’s start our extreme couponing story time. I’ve listed links to individual trips below, or you can just start here and read all the stories in order.

7/2015 at Target – Monica scored $12.52 of profit on $83.83 of merchandise. It was so easy back then to score a profit whenever Target ran a promotion on Banana Boat, plus there was a crazy Playtex deal that was a huge moneymaker. Check out her trip photo and breakdown and I’ll tell you the story.

4/16/17 at Walgreens – This was a multi-store marathon that capitalized on some amazing offers, including an unadvertised Catalina promotion that paired with an Almay clearance and Walgreens store coupon. You didn’t even have to enter the store with any coupons of your own to score the deal. I ended up getting $411 of merchandise while scoring over $19 of profit. Read about it here.

1/2/2015 at Walmart – It was 2015 when Walmart had a big promotion with their “Savings Catcher” automatic price match program (which is now a thing of the past.) It was already a pretty reckless promotion by them, but then they coded some of their competitors’ sales incorrectly…and boy did they pay dearly. I had lots of insane moneymaking trips during this promotion, but through the years I lost all the old posts except this one…when I got paid over $50 to buy a bunch of Tide liquid and Tide PODS. Check out the pic and story here.

2/1/18 at Publix – One of the best things about Maureen’s shopping trips is that she always had great results while scoring an assortment of real food items. Here’s a trip where she paid just $0.39 and scored $249 of stuff. That’s about 98.5% savings for those of you keeping score at home. Her trips weren’t the typical “extreme couponing” type trips, which made them that much more awesome. Read about the trip here.

Black Friday 2016 at CVS – It is unfortunate that I don’t have my CVS Black Friday shopping trip posts from the earliest years of our site, because that’s when the sales were even better. Some years they had about 40 items that were free after Extra Bucks during the sale. However, there were still some amazing deals in this sale. Check it out here.

Black Friday 2014 at Walgreens – Monica was just as crazy as I was when it came to couponing. And on Black Friday, I was no match for her. Unfortunately, at some point her epic 2013 Walgreens Black Friday post got deleted. It was BY FAR the most ridiculous shopping trip ever posted on our site. However, her 2014 trip wasn’t anything to sneeze at either. She showed us what it really means to be doing extreme couponing. She scored almost $500 of stuff for free and made an incredible $44 profit. See the pic and breakdown here.

Couponaholic LLC, the parent company of this web site, is a participant in the Amazon Services LLC Associates Program, an affiliate advertising program designed to provide a means for sites to earn advertising fees by advertising and linking to Amazon .com.